Gina's purpose is to awake a humane transformation amplifying the voice of those who are not being seen and heard in order to reduce inequality. 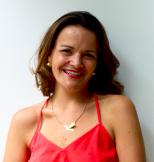 She is Anglo Mexican, a serial social entrepreneur and photographer who is best known for teaching photography to blind people, focusing on their abilities and potential offering them a tool that allows them to connect with the visual world. For more than a decade now, Gina has been shifting mind-sets, helping people to move beyond the limits they set for themselves.

Awarded with the British Empire Medal by Her Majesty the Queen and recognised as a Young Global Leader by the World Economic Forum and as an Ashoka Fellow, Gina now works and speaks in the fields of inclusive and authentic leadership, future of work, change management 21st century recruiting and identifying the specific business benefits of diversity, equity and inclusion as the path for greater innovation and sustainability.