CEO, A Blueprint for Better Business

Charles was one of the founders of Blueprint and a key contributor to the thinking behind the Blueprint approach which asserts that people are not solely self-interested and that business is not solely driven by profit. 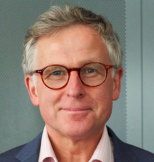 Under his leadership Blueprint has moved from being a small initiative launched in 2012 with a conference that looked at how corporate purpose and personal values could be united to serve society, to an independent charity that is engaged with a growing number of major global companies and whose ambition is to help corporates be truly purpose driven, acting to deliver clear benefits to society as well as delivering long term sustainable performance.

From the outset Blueprint has sought to bring together all strands of society. Charles’s working background across business, government, an economic think tank and, latterly, policy for a major faith institution has helped make this a reality. He qualified as a Chartered Accountant at KPMG in London and holds a BA in Physics and Philosophy and a Postgraduate Diploma in Theology from Merton College, Oxford.

Charles worked as a senior research officer at the Institute for Fiscal Studies and as a Clerk at the House of Commons where he was Clerk to the Trade and Industry select committee. He went on to become assistant general secretary of the Catholic Bishops’ Conference of England and Wales, where he was principal advisor to the Bishops on domestic public policy issues. Charles is married with four children and lives in Brighton.