Accountability mechanisms for inclusion and wellbeing 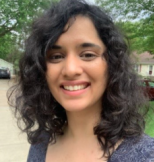 Education is becoming more and more diverse. I'm part of so many student groups and we see people from all races, genders, you know, age groups, everything – which is great. But the tech industry still has issues.

I was the only female out of a class of 80 students in mechanical engineering. There were other females, but they weren't in my batch or were older or younger. And so, one semester, I was the TA for a class and there were some males that did not like that. A few, very few. You know, I think the world has moved forward. Sometimes just because you're a female, they have to go and confirm if you're correct if you make an engineering statement. But other than that, fortunately the generation I have been born into, things have improved.

I think what can and should be done to, to improve that is just validating other people's ideas. The big problem is if, you know, if a person of color or if a female or, you know, a gay person or a transgender person is giving an idea - or, you know, even ageism, someone older than 55, or 60 is giving an idea - people's first impression is; are they correct, you know, is this right? Could they be making a mistake? You never think that when a white qualified man says something, you just believe him?

And so I think it's, it's gonna be a mindset shift that's gonna have to happen over time. But I think people are really, you know, really working hard to do that. You're seeing more and more people from diverse backgrounds succeeding which, you know, which makes you happy.